I met a corporate executive once who told me that one of her favorite sayings was “We celebrate noble failure.”  What would “noble failure” look like?

If we really care about something and we want to make a difference and we “go for it” – not irresponsibly, but enthusiastically – and we don’t fully achieve the goal, then I would call that a “noble failure.” 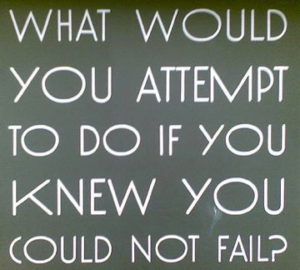 The problem is that we usually don’t “go for it” because we are afraid of failing.  This singular fear keeps us from making more of a difference and increasing our performance.  What we need to do is to shift our focus from whether or not we fully achieve an Aggressive or Almost Impossible Goal to our actual performance on the outcomes we are committed to.  It’s a tradeoff.  If we set bigger goals, the research is clear that we will have higher performance.*  But it also increases the risk of not making it all the way – of failing.  If we can focus more on our delight from increased performance and away from our distaste of failure, then that is transforming our relationship with failure.  I am not saying you have to “love” failure, but you have to at least tolerate it.

Of course, one of the wise reasons you avoid failure is that it is often followed by negative consequences.  Research shows that organizations are only effective using “stretch goals” if they have a “safe-fail” work environment.  If you don’t have that kind of environment where you work, then my advice is to keep setting small Attainable Goals – publicly, with your bosses, etc. – and then set Aggressive or Almost Impossible Goals that you keep to yourself.  You can be publicly successful and produce higher levels of performance.  I gave an example of this in my previous blog.

IBM’s Thomas Watson, Sr., once said “The fastest way to succeed is to double your failure rate.”

And management guru Tom Peters has said “there’s no substitute for getting smarter faster.  And the way you get smarter is to screw around vigorously.  Try stuff.  See what works.  See what fails miserably.  Learn.  Rinse.  Repeat.”

Transform your relationship with failure.  Learn to celebrate “noble failure.”  Get smarter faster and make even more of a Mission Impact.