They are played on the same board, but the two games could not be more different.

The rules for checkers are straight-forward and easy to learn.  The same rules apply to each piece on the board.

Chess has many more rules and there are different rules about how many of the pieces can move. The key in being a successful chess player is to understand the “interdependence” of the different pieces and how you can orchestrate their moves in a way that they complement one another – leading to a final victory.

Many leaders and managers today think they are playing checkers, when they are really involved in a high stakes game of chess.  And they wonder why their strategies won’t work as they fail to take into account the interdependencies of their actions on other parts of the playing board on which they are operating.

The takeaway?  As a leader and manager, make sure you consider the impact your actions have on the other parts of the organization.  Collective actions within the organization need to complement overall performance in order for the organization to win.  Understanding the interactions of the parts is key.

Actually, complicated as it is, chess is much easier than leading an organization. 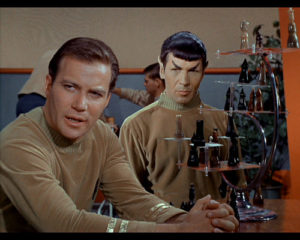 A one dimensional chess board against one opponent is simplistic compared to the multi-dimensional stakeholders, external forces, and competitors that face organization leaders today.  It is much more like the Star Trek version of chess – it is played on multiple levels at the same time.

Take thoughtful care to considering the ripple effects your actions will have throughout the organization – on various levels.  Ask yourself and others about the implications of your intended actions.  If you can orchestrate these well, you can set your organization moving forward in a virtuous cycle of success with enhanced Mission Impact.