You know that things need to change in your organization.  You are either wasting money or opportunities.  Or you keep doing the same things over and over again while people expect a different result (Definition of Insanity attributed to Einstein).  Something has to change! 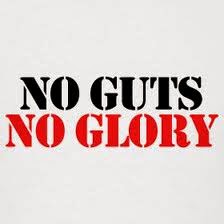 A number of years ago a colleague and I were discussing a similar issue with one of our mentors, Dr. Russ Ackoff, during lunch break on the day he was doing a seminar for EMBA students at the Robert H. Smith School of Business.  Russ yelled at us (I am not kidding) “Start where you are and with what influence you have.  Now!”

Later that afternoon, Russ finished his seminar while my colleague and I sat in the back of the room.  He told the story of a joke his son once told him when he was young.

“Hey Dad, two skeletons were locked in a closet.  What did the one skeleton say to the other one?”

The audience chuckled.  And Russ concluded: “Do you have any guts?”

He appeared to be looking at the students when he said this, but my colleague and I knew he was speaking directly to us.  He was telling us that we couldn’t allow ourselves to be trapped in a closet of constraints that we had imagined.  We needed to summon our “guts.”  Now!

Start where you are, with what influence you have.  Now!  And you will be on your way to making even more of a Mission Impact.