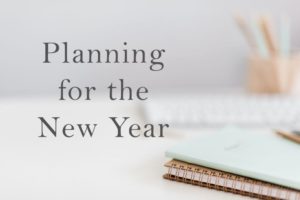 I’m a big fan of David Allen’s Getting Things Done (GTD) approach. I’ve adopted many of his techniques.

Whenever I’ve connected with others about his work, almost no one has come across his fantastic Year-End Review set of questions that can be found here: Questions for completing and beginning the year

I’ve done this every year since he originally published it in 2012.

He has two categories of questions: Completing and Remembering Last Year and Creating The New Year.  A few of my favorites include:

“What was the smartest decision you made last year?”

“Who were the three people that had the greatest impact on your life last year?”

“What advice would you like to give yourself this coming year?”

“What major indulgence are you willing to experience this coming year?”

I’ve further developed on his original list and now create sub goals in each of my “categories” – which he terms as “areas” at the beginning of his original blog post. They provide a great primer for where you might start, but feel free to create your own.

A few other colleagues pick an annual word as their yearly theme. It provides them a simple reminder and focus throughout the year. Easy peasy. Just stick the word wherever you want to remind yourself regularly and make choices toward it.

No problem. Remix it or hack it to work for you. Here are a few quick simple ideas:

In the end, good leaders find that it’s helpful at some point in the year to take stock of what happened, what they’ve accomplished, and what they want to do next.

Mike McRee, Ph.D. is the Chief Operating Officer at the North American Interfraternity Conference and serves as an Adjunct Faculty at the University of Indianapolis School of Business. He has more than 20 years of executive leadership, sales/marketing, nonprofit, fundraising, and consulting experience. Mike lives in Fishers, Indiana with his partner, Kirstin, and their daughter. He can be reached via Twitter @mikemcree