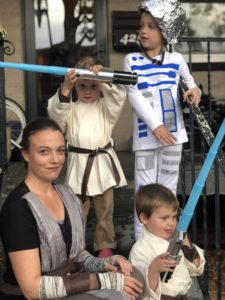 The author, dressed as Rey for Halloween alongside two Jedis and an R2D2

The final movie in the Star Wars saga, the Rise of Skywalker, is coming out soon. Regardless of your feelings on the sequels, prequels, or even the original movies, Star Wars contains a number of leadership lessons. Here are my top three takeaways from watching countless hours of Star Wars with my boys.

1. Grow your influence by empowering others.

Say what you will about Senator Palpatine / the Emperor, but the Sith Lord knows how to stay in power. Palpatine illustrates the central tenets of Rosabeth Moss Kanter’s classic “Power Failure in Leadership Circuits,” namely that when we empower others, we grow our own influence. Palpatine grows his influence by cultivating and mentoring others. He empowers the Trade Federation to create conflict on Naboo, while advising Queen Amidala. He leverages these relationships to become Supreme Chancellor of the Republic.

Of course, Palpatine’s most famous protege is Darth Vader. He entrusts him to build the Death Star and track down the rebels. After Vader’s demise, Palpatine taps Kylo Ren to capture Rey, the new Jedi threat. Through mentoring rising stars across the galaxy, Palpatine manages to stay influential during a number of tumultuous periods.

How can it work for you? You don’t have to be a dark Sith Lord to use this tactic. Cultivate your network by finding out what makes people tick and find ways to help them achieve their goals. Give your subordinates enough autonomy to learn from their mistakes.

2. Coercion will get you nowhere.

As powerful as Emperor is, Darth Vader seems destined to surpass him, at least for a time. Unfortunately, Vader’s subordinates obey him mostly out of fear of having their larynxes crushed. As we see, fear doesn’t motivate employees to put forth their best performance. The second Death Star appears years behind schedule and tracking down the Millenium Falcon becomes an impossible task.

As a side note, do Empire minions work 24-7? The Death Star doesn’t seem to offer much work-life balance to subjects of the Empire. I’d rather be a smuggler like Han Solo. At least you can stop off after work for a drink with friends.

How can it work for you? We know that coercion is the least effective form of power. Maybe you’re not literally crushing throats, but do you hint at your ability to fire, demote, or take away the best work from your employees? Even offering rewards can hint at your ability to take them away. Try using personal sources of power. This can look like bringing your expertise into a conversation, relying on your network to help you promote a particular point of view, or appealing to your team’s values and desires in their work. Also, give your employees a break. Overwork leads to burnout – or unfinished Death Stars.

How can it work for you? Are you seeking out and cultivating the next generation of talent? Just as in Star Wars, they may currently be in unexpected locations. Your next CEO might be wasting away in your organization’s Tatooine. And if you see rising stars as a threat, remember that by cultivating and empowering others we grow our influence. It’s rare that we forget our mentors and sponsors who have helped us along the way. The rising star you mentor today could be the leader who brings you back for one last battle to save the Republic.

May the Force Be With You!

Dr. Nicole Coomber is an Associate Clinical Professor in Management & Organization and Assistant Dean, Full-Time MBA Program at the Robert H. Smith School of Business at the University of Maryland. Nicole’s writing has appeared in the Washington Post and Forbes, and she writes on education at Teaching with Coomber She is the mom of 4 lively boys between the ages of four and nine.